The recent decision in the Apple/Samsung debacle has really got me thinking about a few things. If you read my last blog post you’ll know that I feel somewhat disappointed in Apple’s seemingly bullying behaviour towards a competitor. I suppose I feel like this because I have had such a high opinion of Apple for so long and this is just not what I expected from them. The hashtag #boycottapple was trending globally on Twitter for a while this morning so clearly a lot of other people were equally unimpressed with the whole thing.

Realistically, I know it’s more complicated than that. The fact is that Apple is a company, not a person, and companies are ruled on business decisions, not emotions. There is no doubt that Apple brought amazing innovation to the phone business with the release of the first iPhone and that numerous competitors immediately changed their design ideas in order to compete. And yes, quite a few of them probably copied some ideas. I also understand that Apple has a responsibility to their shareholders to protect their intellectual property, and so they probably had little choice but to pursue Samsung and teach them a lesson that to copy is not acceptable. There may have been other options on the table for Samsung to license some of these technologies and ideas, paying Apple for the right to use them, but no deal was reached. Whether that was because the price was unacceptably high, or some other reason, I don’t know. The point is that no agreement was reached and Apple had to act to protect their patents.

Which is the real issue here. The patents. Let me point out that I’m not a patent lawyer, so I won’t pretend to understand the finer issues of IP law, but it seems quite obvious to me that the US patent system is set up in a way that allows ideas to be patented that many reasonable people would not see as patentable ideas. 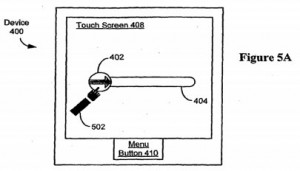 Take the slide-to-unlock feature for example, Apple’s method for unlocking a touch screen device. You can read the full patent application here (pdf, 418kb) which describes the idea behind the slide-to-unlock feature.  The application is titled “UNLOCKING A DEVICE BY PERFORMING GESTURES ON AN UNLOCK IMAGE” and takes 35 pages to explain the rationale, background and method for sliding a finger across a touch screen to unlock it. Again, I’m not a patent lawyer, but surely for an idea to be patented it needs to be original, and not have prior art. If it’s been done before by someone else, then how on earth can it be a patentable, original idea?

Now take a look at this video of a demonstration of the Neonode M1n, a quirky little device that was not overly successful, but skip to the 4:00 minute mark in the video and look at how the device is unlocked. I’ll wait while you do that…

Look familiar? Sliding a finger across a touch screen to unlock an electronic device clearly existed prior to the iPhone, so how can a patent be awarded for this? You might argue that Apple implemented it differently to the Neonode, but you could equally argue that Android implemented it differently again. And how different does it really need to be before you can argue that it is not just an evolution of the idea that came before, but is now a whole new idea? 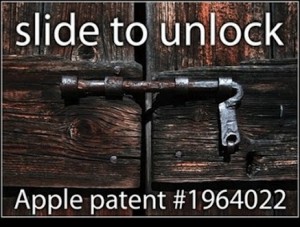 In fact, what about the picture on the right, which make the point that the basic idea of sliding something sideways to unlock it is not at all new and has existed in a pre-digital form for a long time. At which point do we accept that a new idea – which clearly has its fundamental roots in an existing idea – is different enough to be considered a whole new independent (and therefore patentable) idea?

Slide-to-unlock is a good idea, no question. Whether they invented it or not, Apple implemented it in a good way that makes sense. If other phone makers had truly wanted to play by the rules they would have looked at what Apple did and said to themselves “Ok, so we can’t do it like THAT… we need to come up with a different way to do unlock the touch screen.” And given the number of really smart people who work in this industry, I have no doubt that they could have come up with some other non-infringing way to do it (and given the ruling in Apple’s favour, they may have to come up with other ways to do it in the future).

And that’s just slide-to-unlock.  There were other, much vaguer, patents that were apparently infringed, like making a device that was rectangular with rounded corners. Or having glass screen that goes from edge to edge. Or the shape of the bezel. Let’s assume that there were numerous patented ideas that other manufacturers looked at and said “well, we can’t do it that way, we just have to come up with a different way to do it”. Presumably, this is what Steve Jobs was talking about when he said he wanted other companies to stop stealing Apple’s ideas and come up with their own ideas. Make it differently so that it’s not the same as Apple’s stuff. This, despite the fact that Apple is obviously very good at taking the ideas of others and reinterpreting them into something different enough, or polished enough, or novel enough, that it might be considered “new”.  A lot of the anger being directed at Apple right now is because of the massive hypocrisy they’re displaying by both simultaneously taking the ideas of others and building on them while doing everything possible to prevent others from doing them same thing to them.

I know that when I get into a car to drive it, I’me very glad that there is a round steering wheel in front of me, and brake, clutch and accelerator pedals where I expect to find them. Whatever car I drive, I’m glad they all work in a similar way. I’d hate to have a situation where every car I got into had a slightly different method for stopping and steering, simply because each car company had to come up with their own way of doing things because they were not allowed to “copy” other cars. That’s not innovation, that’s insanity.

In an interview with Robert X. Cringely, Steve Jobs once famously claimed Picasso said “Good artists copy, great artists steal”. A bit of research online suggests that Picasso never actually said this at all. Jobs never let the truth get in the way of a good story. It turns out that the Picasso myth was actually based on a similar quote attributed to the poet T S Eliot, who allegedly said “Good poets copy, great poets steal.” In an excellent blog post by lawyer Nancy Prager she asserts that the (mis)quote was attributed to Eliot in a 2006 article by a chemical engineering professor called Bill Hammack about fair use and copyright. Further research revealed that the misquote was based on a 1921 essay written by T S Eliot about the playwright Phillip Massinger, which Bill Hammack later decided to paraphrase as “Good poets copy, great poets steal”.

One of the surest tests [of the superiority or inferiority of a poet] is the way in which a poet borrows. Immature poets imitate; mature poets steal; bad poets deface what they take, and good poets make it into something better, or at least something different. The good poet welds his theft into a whole of feeling which is unique, utterly different than that from which it is torn; the bad poet throws it into something which has no cohesion. A good poet will usually borrow from authors remote in time, or alien in language, or diverse in interest.

In other words, stealing might be ok as long as you make the original better. Or, as Albert Einstein once observed, “The secret to creativity is knowing how to hide your sources”.

I find it interesting that even the story of the statement about copying vs stealing is based on an evolutionary trail of the quote as it morphs from one form to another, becoming variously attributed to different people along the way. Maybe Picasso did say it, who knows? He may have even come across the T S Eliot version. And he apparently influenced the thinking of Jobs with it. Or not. Who knows. Does it even matter?  It seems that ideas rarely stand on their own, and are usually part of a much bigger web of similar ideas.

Perhaps when we hear Jobs misquote Picasso, who was misattributed to Eliot, who was paraphrashed by Hammack, what we should take from the statement is not only that “stealing” is really just about taking ideas and making them better, but also that copying and “stealing” of ideas is a legitimate means by which a culture is transmitted.

I think it opens up an even bigger discussion about what constitutes originality, what we mean exactly by “innovation”, as well as the incredible value of sharing.  Perhaps in another blog post…

Nothing New Under The Sun by Chris Betcher is licensed under a Creative Commons Attribution-ShareAlike 4.0 International License.

4 Replies to “Nothing New Under The Sun”