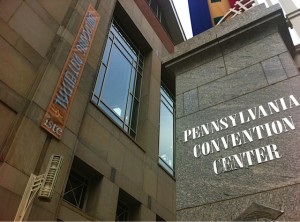 It’s been a big few weeks. I’m currently writing this while flying in an Air Canada Boeing 777, seat 40J, somewhere just south of the equator and slightly west of the International Date Line, chasing the sun around the globe on my way back to Sydney.

I’ve been in Canada for much of the last few weeks, visiting our Canadian family and friends, something I wish I could do more often. But for three days I managed to slip away down to Philadelphia PA for my first ISTE conference. If you know me, or read this blog at all, you may know that I tend to get around to a few conferences in various places, but the ISTE Conference (and prior to that, a NECC) has eluded me so far. For whatever reasons, I haven’t been able to get to this event so when the opportunity came up this year I jumped at it. And I’m glad I was able to… it is an amazing event.

In thinking about ISTE 2011 to decide what to blog about it, there are a few notable things to mention, but for me, one really stands out as the highlight.

First, there was the sheer size of it. With (I’m told) 20,000 delegates this year, the scale of ISTE is unlike anything I’ve seen before. Pennsylvania Convention Centre was simply enormous and easily housed the hundreds of exhibitors, vendors, workshops, presentations, displays, poster sessions, and of course, the thousands and thousands of attendees. I don’t know exactly how big the PACC actually is, but it’s huge. 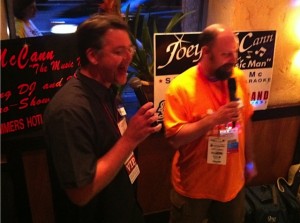 Secondly, the number of presentations taking place at any one time was mind boggling. There was so much choice, so many options, it was hard to know where to be. I only attended a few actual presentations, but the quality of the presenters and the information was very good. Whether your interest was in learning about the various edtech tools, in hearing about new pedagogical approaches, or finding out about new ideas for what works in today’s classrooms, there was something for everyone. Some sessions were huge, like the keynotes with 6000+ people, to presentations with a few hundred, to classroom-sized workshops, to poster session conversations; the choice available through the organized sessions was astounding.

There were also the fun events too. The Google Party held at the Philadelphia Academy of Natural Sciences, held among the dinosaur bones and the fluttering butterflies, was great fun, and being invited to the invitation only Google Certified Teacher cocktail party beforehand was pretty special. The Edtech Karaoke Party the next night (#etk11), where we all had a few drinks and got up and sang, was one of those events I’m sure I’ll remember for a very long time. 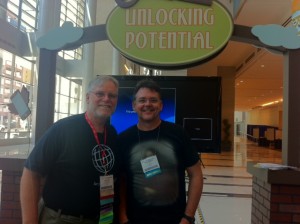 But the thing that really made the ISTE event most valuable for me was the opportunity to meet and mix in person with the people in my PLN. It was, as someone observed, like having your RSS reader come to life. I was constantly bumping into people I knew, whose blogs I read, who appear daily in my Twitter stream, whose YouTube videos I’ve watched. Some I’d met before, but most I had only ever known online.

As you’ve probably experienced yourself, the best parts of most conferences are the serendipitous conversations, bumping into people in the corridor, having a chance to chat face to face. For me, ISTE was all about the people I met.

After the conference was over, I jotted down a list of all the people I’d had a conversation with over the previous three days, and the size of the list surprised me. In no particular order (other than that dictated by my slowly deteriorating memory!) here is a list of all the characters I met, chatted with, or had a meaningful conversation with over the three days I was at ISTE…

The (less than) 140 Characters 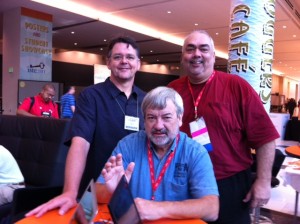 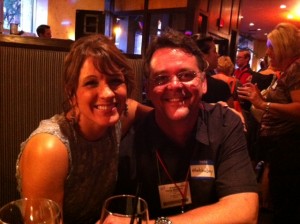 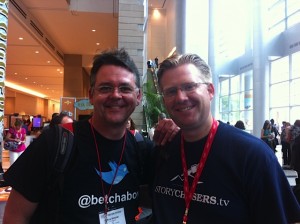 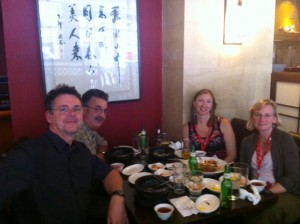 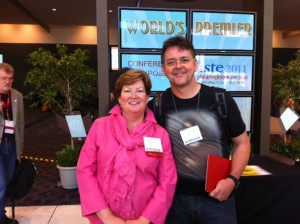 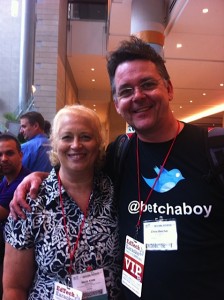 That’s nearly 100 people and nearly 100 great conversations. (*I was aiming for 140… there were actually about 120 people on my original list but thanks to the lack of an undelete feature in Pages on the iPad, I lost a bunch names that I now just can’t recall! Grr! My apologies if I left you off the list!)

I think it just goes to show that the real power of an event like ISTE is in the people you meet and the conversations you have. That’s where the real connections are made and strengthened. Between the catch-ups with people I already knew quite well – like some of this year’s significant Aussie contingent – through to the folk I have previously met in the past, to the many who I have only ever known through our online connections, meeting in person and having the chance to connect and share and talk was what made ISTE truly priceless for me.

Thanks for being part of my network! See you in San Diego next year?

PS: If I have missed your name, or was unable to include your Twitter contact, please let me know so I can include it.

*PPS: Apologies (or thanks) to @lasic for the idea of the name for this post

ISTE in less than 140 Characters* by Chris Betcher is licensed under a Creative Commons Attribution-ShareAlike 4.0 International License.