Nǐ hǎo! I’m currently in Shanghai, China for the Learning 2.010 conference, and that’s pretty exciting for a number of reasons. 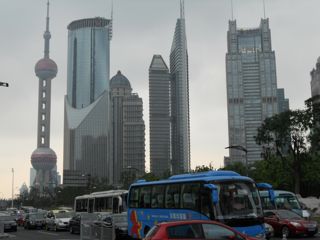 Firstly, mainland China is somewhere I’ve always wanted to go. In particular, Shanghai is fascinating because of its almost incomprehensible growth.  Intellectually, I know that China is a fast rising star, rapidly moving from a developing nation to a developed nation. We’ve all heard the statistics about the size and growth of China, of how Chinese is destined to become the most used language on the Internet, of how China has more honours students than the US has students, and so on.  Seriously though, no matter how many times I see the “Did You Know” videos that tell me how fast China is growing, nothing can quite prepare you for the endless ocean of concrete and skyscrapers that simply didn’t exist a mere 15 years ago.

Perhaps more than any statistic, this is where China’s growth really hit home for me… I got picked up by Michael Weber at Pudong airport and we got a cab back to the hotel… thankfully, I’m still alive to tell the story of it.  The cab driver was clearly not an experienced driver at all, struggling with the gears and clutch in this beaten up, manual VW taxi she was driving.  She had no idea where to take us, and ended up stopping in the middle of the freeway (I’m not exaggerating, quite literally in the middle of a five lane freeway!) to punch the address into the GPS. Once she got underway, the trip was a scary series of swerving lane changes, a mix of very slow and very fast driving, and lots and lots of horn tooting. The notion of staying in one lane, using her indicators, observing a speed limit, etc, was clearly not part of the plan.  But what struck me most as I glanced across at Michael, who must have been able to tell what I was thinking, was when he said “you have to remember that most people here in Shanghai had never driven a car until 5 years ago.”  5 years.  When he put it like that, and you then see the number of cars on the road, the freeway infrastructure and so on, and you realise that all of this growth has happened in the last 5 or 10 years… well, it’s hard to comprehend. 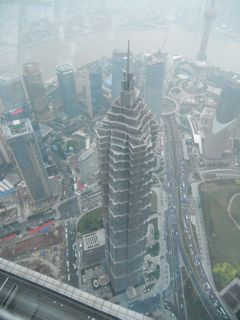 Then yesterday I was on the 100th floor observation deck of the Shanghai World Financial Centre. As I stood there, standing on the second tallest building in the world, looking down on the Jin Mao Tower – the fifth tallest building in the world – just next door, and the miles and miles and miles of skyscrapers you can see (well, you could see, if not for the smog) in all directions, it was awe inspiring view. Just seeing this sight is incredible enough, but knowing that this has all been built in less than the lifetime of my two teenage kids is just, well, mind snappingly incomprehensible.  I’m glad I got here to see it for myself, because the growth here in Asia is difficult to comprehend unless you actually see it.

The second reason I’m excited to be here is to be one of the cohort facilitators for the Learning 2.010 Conference. It’s a conference that I’ve heard so much about of the last few years, and that I’ve followed on Twitter each year with great envy.  It’s going to be a great conference for a few reasons, but mainly because it’s focused on trying to deliver a conference experience that breaks the mold of what we’ve come to expect from conferences. It uses a very learner-centric model to make the participants active learners rather than just delegates who turn up to listen to people talk at them.  Philosophically, it’s the right idea because although we talk a lot about 21st century learning, so many education conferences are still run in “delivery mode” where the presenter talks and the audience listens.  That’s ironic for an education conference in particular, because the people doing the talking are usually telling the people listening that schools needs to shift away from being places where teachers talk and students listen.

At Learning 2.010, the goal of the conference is to make the participants active in the learning process.  Although the conference does have a few strands or themes to get started with, the actual content of the event will be directed by the needs and wants of the people who attend.  It’s run very much in an unconference mode, and even the themed cohort workshops are loosely structured so that they can provide the flexibility to adapt to the needs of the participants on the fly.  The event is being held at Concordia International School in Pudong, a pretty impressive school in its own right, and I’m teamed up with Melinda Alford, one of the middle school teachers from Concordia, to cofacilitate the cohort called “Fostering a Culture of Learning and Creativity”.  As cohort leaders, we’re going in with lots of ideas and plenty of experience, but with absolutely no idea where it will end up.  It’s risky, a little scary, and it’s harder to do, but I believe that it’s absolutely the right way to approach it.  Education conferences have to start modeling the sort of learning and risk taking that we keep saying we are all about. Kudos to the Learning 2.010 organisers for having the balls to run it this way. 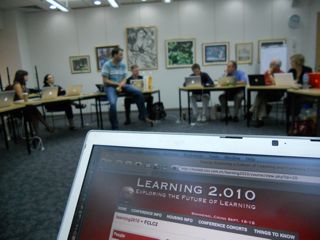 The third reason I’m so excited to be here in Shanghai is the people. My PLN came to life in a whole new way yesterday as I got to meet in person an amazing group of educators that I’ve only ever known online.  I was sitting in a planning session yesterday, sharing the conversations with people like Kim Cofino, Darren Kuropatwa, Wes Fryer, Alec Couros, Jeff Utecht, Julie Lindsay, Tim Lauer, Liz Davis, Steve Hargadon… and it was a bit of an out-of-body experience really.  I know that our rock stars are not like your rock stars, but I think we were all as excited as each other to finally be meeting in real life. I also got to meet a whole lot of other people that I really didn’t know as well, who are equally amazing educators, and who will now become part of my growing PLN.

We all had dinner together last night in the Jin Mao Tower, then drinks afterward at Cloud 9, apparently the highest bar in the world.  Who knew?

I’m really looking forward to the next few days!