If you like, you can skip right to the bottom of this post and just watch the video, but I always find the story behind the story kind of interesting. So I thought you  might like to know a little bit about how and why this video was made.

It started out with a simple tweet from my buddy Kim Sivick in Philadelphia.  It started a conversation that went something like this… 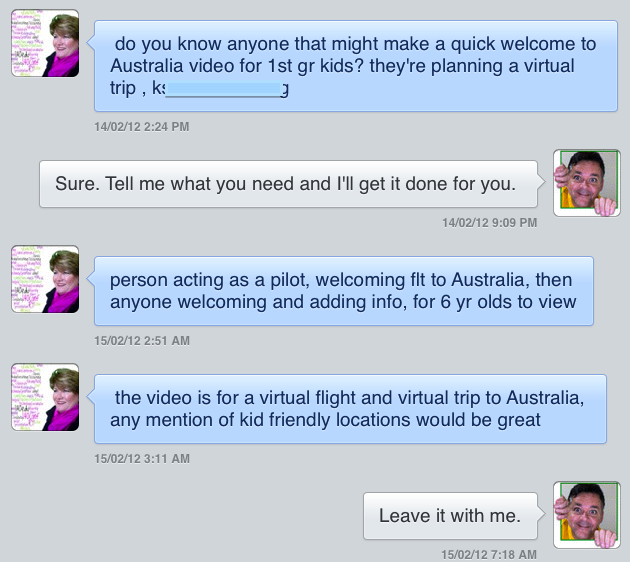 Do I know anyone who might make a quick Welcome to Australia video?

And besides, I owe Kim a favour. When I was running blogging workshops with our staff last year I was hoping to tap into the experiences of some very blog-savvy educators by getting them to Skype in and talk to our teachers about the realities and the practicalities of using blogs in the classroom. When I asked for volunteers on Twitter (where else?) Kim Sivick  was one of those who generously responded and agreed to spend time talking with us to share her expertise.

I also got to meet Kim in person at ISTE in Philadelphia last year too, so it was nice to “close the loop” on our virtual meetups.

With virtually zero planning, I dropped into one of our Year 2 classrooms and asked the teacher there, Lisa, if her kids would like to make a video for these students in Philly and she jumped at the chance. In no time, Lisa and I had a bit of  a brainstorm on what sorts of things we might do, and she started working with the kids to write a script using GoogleDocs. The script gradually evolved and took shape over the next few days.

I’d been wanting to do some work with chromakeying, or greenscreening for a while, but had just never gotten around to it. It wasn’t something I’d done before, but I suggested to Lisa that if we shot the video of the kids in front of a greenscreen, then it might be fun later to try and drop in the images of various parts of Australia as backgrounds. She thought that sounded pretty cool, so I went to our IT Director and asked if I could buy an inexpensive greenscreen kit. It was one of those things we’d talked about buying for a while, but never quite got around to it. With a reason to need it now, we went online and ordered it on the spot. 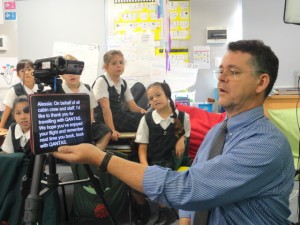 When it eventually arrived we set up a date for the shoot. The classroom was transformed into a studio for the morning with lights, camera, and plenty of action. I used iPrompt Pro on my iPad to transfer the script, and then held it up just under the camera lens as a  scrolling teleprompter so the kids could read the script as naturally as possible. We shot it on a Sony HiDef camcorder at 1080i/50. It took a few takes to get things right, but the kids really worked hard to do it was well as possible. Being able to repeat a section over and over in order to get it right was a valuable part of the learning experience.  When it came time to shoot, we all had fun calling out things like “Quiet on the set!” and “Rolling!”  and “Action!”, and running things just like a real movie set. I think the kids had a lot of fun recording it.

I took the footage back to my desk and dumped it all onto my MacBook Pro to ponder out the best way to edit it.  Although I definitely do want to get the kids doing more video work themselves, getting them to edit the footage was not really the learning goal for this particular exercise… it was all about their performance for the camera. After some experiments with iMovie I eventually decided that I’d cut it together with Premiere Pro instead. Premiere Pro was certainly not a program that I knew well, but this seemed like a great chance to get cosy with it. I’m glad I did… it’s a very impressive NLVE tool and I like it a lot more than Final Cut Pro 7.

I always try to make sure we set a good example for students regarding copyright, so it was important that all the background images were available under a Creative Commons licence. I think it’s really important that we demonstrate to our students that you can actually make worthwhile digital media without continually breaking copyright law. All the background images are CC licensed, as are the two pieces of music that I included, both from jamendo.com. The two videos were not released under CC, but using their YouTube contact address I wrote to the owners of both and both were more than happy for us to use their clip. One even offered to send us the hi-def footage! Most people are pretty generous if you just ask. Remember, Copyright doesn’t mean “you can’t use it”, it just means “you can’t use it without permission”, so if it’s not CC, then do the right thing and get permission! It’s just not that hard. (Publishing works under a Creative Commons license makes it much easier of course because it’s essentially an “up-front” permission which is pre-granted as long as you stick to the uses stipulated by the copyright owner)

After a couple of days of editing over the weekend, I did the final render to a 720p .m4v file and uploaded it to YouTube as a private link so the Philly kids (and our kids) could see it the next day.  Here’s the finished product…

It always nice to ceremonialise things that are a bit special, so we set a date for a premiere screening and invited all the Year 2 mums and dads in to watch. When the Year 1 Philadelphia kids watched it, they all wore Aussie bush hats and set up their classroom like the inside of a plane to watch the video.  We had our screening this morning and the movie played to a packed classroom of excited Year 2 students and their parents. Proud parents. Excited kids. Performing for a real audience. Making opportunities to create and practice and iterate. Immediate feedback. And lots of fun and laughs. An authentic learning experience?  You better believe it..

Kim tells me that her kids are working on the sequel for us, showing us their virtual trip to Philadelphia, so we are looking forward to that.

Lisa, our Year 2 teacher, now keeps asking me when we can do our next global project, and is coming up with lots of cool ideas for how it will fit into next terms syllabus.

Overall, I think I’d consider this whole thing a win, wouldn’t you. 🙂