I’m in Toronto, Canada, at the moment, which is somewhat of a second home for me. My lovely partner Linda is a born and bred Torontonian, and although we both now live in Sydney, Australia, we try to travel back here at least once a year to visit friends and family.  Our current visit was unplanned and not for the usual reasons we like to be here though… Linda’s father Ron passed away a few days ago. He’d had a number of health challenges for quite a while, and although he always maintained a positive outlook and a cheery disposition, things had been getting increasingly difficult for him over the last few months. Early on Wednesday morning Toronto time, the day before his 82nd birthday, Ron decided enough was enough and passed away quietly in his sleep. May he rest in peace.

Although I never got to spend as much time with Ron as I would have liked, he was a lovely gentle man, and every time I met him he was always smiling, always taking an interest in those around him. He was always curious and interested in the world around him – I used to say to Linda he was like an excited little kid trapped in an older person’s body. We spoke on the phone every so often, and apart from always asking about the weather (he was, after all, a Canadian!) he always took a great interest in what was going on with Linda and I, where we were travelling to and what was happening in our world. As we Aussies would say, he was a genuinely good bloke.

I found this timelapse video of Toronto called Toronto Tempo, and I think it’s rather beautiful. I’m posting it here as a bit of a tribute to Ron.  We’ll miss you mate. 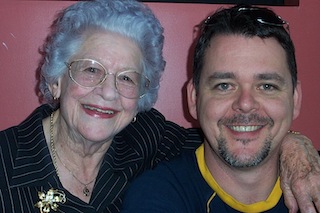 I know this rather personal post is out of character for this blog, but I felt I wanted to post it anyway…  I hope you don’t mind.

My grandmother died this week. The funeral was today, and it was a tough day to get through.  I was brave on the outside because my mum needed me to be, but on the inside, I cried a lot.

I really loved my Nanna Brown. She was an extraordinary woman who, at nearly 98, lived through most of the past century.  I had never really stopped to think about it, but when I looked at the list of world events she’d lived through it was astonishing.  I know we talk a lot about change, and the pace of change, and how important it is to deal with the changing world we live in, but in my nan’s lifetime she lived through both World Wars, as well as an assortment of other wars and a Great Depression.

She was just over 1 year old when the first transatlantic flight was made, 15 years old when Penicillin was discovered, 24 when construction started on the Golden Gate Bridge, and just a few months older when the Hindenburg disaster happened.

At 32 she saw the Atomic Bomb drop on Hiroshima and Nagasaki, she was 39 when the world’s first jet airliner went into commercial use, and 48 when the first human went into space.

At 50 years old, she watched the construction of the Berlin Wall, and at 77, she watched it come down again.  When she was 80 the European Union was founded, and she was 88 when New York’s Twin Towers were attacked on 9/11.

She grew up before television, before radio, before cars, before the Internet. While she was alive, so was Gustav Eiffel, Thomas Edison, Alexander Graham Bell, Sigmund Freud, Walt Disney and Henry Ford. She was born before, and died after, John F Kennedy, Martin Luther King and Benito Mussolini.

What a remarkable period of history to have lived through!

The last few conferences I’ve been to all had keynote speakers who repeated the same basic message… the world is changing and we better get good at dealing with change.  As much as we edtech types like to carry on about adaptability and the need to learn to deal with dramatic changes in our world, we sometimes tend to forget just how much the world can change in one person’s lifetime even if that person grew up before the invention of the Internet, Social Networking and the rise of China.

I was really close to my nan, and I’m glad I was with her just a few days before she died. She was a truly remarkable lady.

If you’re interested, this is the eulogy that I wrote and read at the church today…

A couple of days ago, I was asked what I remembered most about Nan.  There are lots of memories of course, and although I’d not really thought about it before, I’m starting to realise that many of these memories have profoundly affected who I am as a person, the way I see the world and the way I’ve grown up.

There are so many things that Nan taught us all. When we lose someone we love, it’s hard to not feel sad and upset and to grieve about the loss of what we no longer have. But I know that everyone in this room could come up with a list of their favourite “Nan moments”… those treasured times when she made you laugh, or made you think, or made you see the world a little bit differently to the way you’d seen it before.  Although Nan isn’t with us anymore, if we can remember back to those special moments she created with each of us, I’m sure we’ll find that there are ways in which they’ve touched our lives that will live on for a very long time.

I’d like to think that it’s those moments that are the real legacy Nanna Brown leaves with us.