I’m a big fan of Leo Laporte.  Leo is best known these days for running the TWiT network (This Week in Tech), a podcasting empire that publishes more than a dozen excellent tech podcasts like MacBreak Weekly, This Week in Tech, This Week in Google, FLOSS Weekly, Windows Weekly, Net@Night and quite a few others, but he comes from a background in traditional radio and TV media. Leo has a wonderful, easy-to-listen-to manner, has his finger on the pulse of the tech industry better than anyone I know, and is always covering the latest, most interesting stories in tech.  It’s easy to stay current with the latest tech goings-on just by listening to one (or more) of his podcasts. I listen to at least three of them reguarly, and others when I have more time… my drive to work just wouldn’t be the same without Leo!

This clip is a recording of a live stream from a talk given by Leo to the Online News Association Conference in San Francisco a couple of weeks ago.  It goes for about 40 minutes, but if you’re looking for some excellent explanations of how and why the media landscape is changing, you really should take a listen to what he has to say.

Some of my favourite quotes from this talk:

On the economics of online advertising: If you think the newspapers and the television stations are in trouble now, just wait a few years, because Facebook and Google offer advertisers the holy grail. When you buy an ad on those platforms, you’re buying an ad from somebody who is interested in buying your product. They’re pre-qualified. Yeah, I can get 18 million on Seinfeld, but I have to pay for 18 million – I only want to talk to 100,000.  On Facebook and Google I get that 100,000 and no more.  It’s hugely valuable, and they’re not going to pay these princely sums for these audiences anymore.  That model is dead.”

On the future of traditional media: “Newspapers were invented to distribute display ads, and they just stuck some stuff in between the display ads. As soon as display ads don’t work, which they’re not, it’s going to go away… (newspapers) will be the realm of the rich person.  We’ve seen revolutions like this before. When Gutenberg invented movable type in the 15th century, before that, only the very rich could afford a book because it had to be hand-written by a monk. The printing press made all this accessible. Did it kill books?  No, but it changed fundamentally what a book is.  So if you look really short term, yeah TV didn’t kill radio or the movies, we still have all that… but I think we are in a much more fundamental transition… Will blockbuster movies go away? Probably not, but I think you’re going to start to see far more small films created by kids with digital cameras.  This YouTube generation is going to change everything.  I think way we understand movies, the way we understand newspapers is going to go away.”

On the role of Twitter: “Twitter is brilliant, but I think it’s just the first iteration of what will eventually be an internet nervous system that you’ll be plugged into, and the zeitgeist will flow around you at all times. I think there’s better ways to do it than Twitter.  I think we participate in it as journalists… we’re actually the input, we’re the ones who are putting content into it, and then people stir it and churn it around.  Twitter is at it’s best, not when you say ‘I had toast for breakfast’, but when you say ‘Did you read this great article?’  If you really use Twitter properly, if you check it regularly, you don’t have any fear any more that you’re going to miss something, do you? Because you just know. If you follow the right people, the stuff you care about, you just know.”

On getting attention online: “The science fiction author Howard Sturgeon said ‘80% of everything is crap’, and I think there’s some of you right now that might say it’s more like 99% of everything is crap. There’s all this stuff now, and how does stuff surface. I believe that the 1% of the great stuff will just surface.  As this internet nervous system gets more developed, word of mouth becomes more efficient and great stuff rises. Soon, you will no longer be able to use mainstream media as a launching pad. The answer, I think now, is the same as it should always have been – the best content. The way to get good is by doing great stuff. Do the best stuff you can, do the stuff you care the most about so that your passion shines through, because people love it when you’re passionate.  And if your passion shines through and you’re doing great stuff, I believe that this new internet nervous system will surface you. So yeah, there’s a lot of crappy YouTube videos, there’s a lot of stupid Twitterers – there’s a lot of crap, there’s more crap than ever before – but at the same time, there’s more great stuff than ever before.  Just do good stuff.”

As an educator, I think that last quote contains the real truth that we need to be encouraging out of our students, ourselves and our colleagues. “Do the best stuff you can, do the stuff you care the most about so that your passion shines through, because people love it when you’re passionate.” 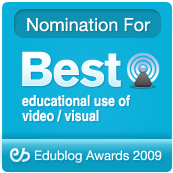 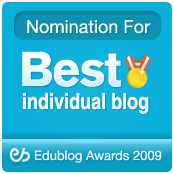 Yes, it’s that time of year again! The annual Edublog Awards are in full swing, and after a few weeks of people making nominations for various blogs, tweets, wikis and social networks across a really broad range of categories, I’m extremely honoured to have had not one, but two of my online projects – Betchablog and The Virtual Staffroom – mentioned for an “Eddie” this year.

These awards (which are great to be considered for, but hopefully not to be taken too seriously!) aim to highlight and recognise some of the great work taking place in the online educational sphere.  Education is certainly one sector that seems to have really embraced the use of blogging as a tool for reflection, sharing, helping others and generally assisting teachers and students to “find their voice”.  I know that I’ve personally found the act of blogging to be critical in helping me “think out loud”, processing ideas in a public space where they can be exposed to the scrutiny, support and suggestions of others.  Having a blog has certainly helped me find my own voice and given me a platform from which I can share easily and freely with the world, whether it’s some resource I’ve found, a tutorial I’ve made, or just some vague idea that’s been floating around in my head looking for a place to be expressed.  I blog for myself first and foremost, and the idea that someone else might also find some value in any of it is just the icing on the cake, although it is certainly very tasty icing! I really do value the sense of community that my blog has created for me and although I say that I write just for myself, I must admit that it would be quite a hollow experience without the wonderful support of those who read, comment and engage with me.

To those that nominated Betchablog or The Virtual Staffroom this year, thank you!  To those that might consider casting a vote for either of them, thank you to you too.  But mostly thank you to everyone who reads (and subscribes) to some of these things I’ve been doing online over the last few years… you are the ones who make it all worthwhile for me.