As the world rearranges itself to cope with this dreadful CoVid-19 situation, the reality of social distancing is setting in. If we are to stop the spread of the coronavirus then we really need to pull back on the amount of contact we have with others, at least for now. As a result, events are being cancelled all over the place, businesses are telling their people to work from home, and schools are facing mass shutdowns until this thing is under some kind of control.

In the last few weeks at Google we have recieved lots of questions from schools about how we can support remote teaching – using technology to run classes virtually – so that while school might not be able to go on, the learning can. Most of the major edtech companies have responded to these requests by making sure their remote collaboration tools are available to all schools, and many are offering schools the use of premium features at no extra cost. Google, for example, is currently giving every G Suite school access to the premium (usually paid-for) features of Hangouts Meet for free, so schools can have up to 250 participants in a video call as well as recording and livestreaming features. Google Classroom is already well placed to support online learning, and of course Docs, Sheets, Slides etc do a great job of allowing people to work together no matter where they are.

Beyond the tools though, there has been a massive push to create resources to help teachers who have never had to consider how they might teach online. PD Partners, Google Educator Groups, and of course regular classroom teachers are busily creating videos, screencasts, notes, etc, to help guide their colleagues in how to operate in this new remote learning reality.

I’ve sat down a few times over the last few days to plan what I might contribute to this push for new content. I have made a lot of screencasts and tutorials over the years, and produced a ton of resources for teachers to help them understand how to get the best from technology in their classroom, but right now I’m trying to give some thought to what teachers really need if their school shuts and they learning must go on. How do we quickly give teachers the new skills they need, and what exactly are those skills anyway?

So I’m putting the question out there, and I’m inviting you to respond in the comments below… as we race to create more resources and content to help teachers get through these inevitable school closures, what do you think teachers most need?

I recently gave this keynote at the EdTechteam Cape Town Summit, titled “Imagine the Possibilities”. I’ve actually given this talk a number of times at Summits and other events all over the world, but this is likely the last time I’ll use it, so I’m posting it here just for posterity.

I spent a few hours this afternoon driving the nearly 200km from Sydney to Bathurst for a day of work in a Bathurst school tomorrow. As I crossed the Blue Mountains and went past Lithgow, the roads open up a little and there are longer, straighter faster stretches of road. On one particularly long straight stretch of road I noticed that my steering wheel hung ever so slightly to the right even though I was driving in a straight line. It wasn’t enough to really bother me, but I started to wonder why it was like that and what it would take to fix it so the steering wheel was perfectly neutral while driving in a straight line. I’m sure the reason had something to do with the camber of the road, and I realised that I do in fact have some level of understanding of how a vehicle’s steering system works. How did I know this? As I pondered the question I remembered back to my very first car and how I had – on several occasions – pulled the steering wheel off and put it back on again. 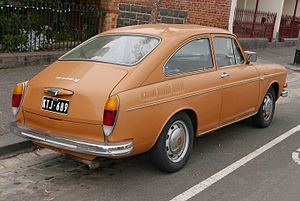 You might be wondering what caused me to remove and replace the steering wheel on my car.  I mean, who does that? As I tried to remember the reason for why I would be disassembling parts of my car, it dawned on me that I used to take that old 1970 Volkswagen Type III apart and put it back to together again not because there was anything wrong with it, but simply because I could. Yes, I used to pull things apart on that car and put them back together again just for the fun of it and to try to understand how things worked.

There were many times where I pulled my VW apart and couldn’t figure out how to put it back together, and it was off the road for a few days until I could work it out. Back then, that didn’t seem like a big deal. And the value in learning how my car worked seemed a small price to pay for the inconvenience of having it off the road temporarily.  Since the VW I’ve had several other cars that I’ve been quite willing to pull apart and try to put back together, simply because I wanted to know how they worked. Engines, gearboxes, diffs… I’ve had all these things in pieces just because I was curious about what was inside and how things worked.

As I drove along in my current car, a 2015 Mitsubishi ASX, I pondered the prospect of pulling the steering wheel off and putting it back on again, adjusting it by one spline and wondering if that might fix my steering wheel’s droop to the right. As I thought about doing this, I realised that I honestly wouldn’t attempt it on the Mitsubishi, not only because it was probably way more complex than my old VW, but it was more likely to be an expensive repair if I messed it up.  Could I work out how to remove and replace the steering wheel on my current car? Sure. But would I? Nah, probably not.

And I got to thinking about why that is. I’m still a curious person and I still like to know how things work. But the idea of taking my 2015 ASX apart and putting it back together again – for fun – is just not something I’d consider, even though I’ve done it to several of the cars I’ve owned over the years.

What was different? As I thought about this, I wondered if it was the fact that the newer and more expensive the car, the less inclined I would be to tinker with it just for fun. My ASX cost about $26,000. My first VW cost $800.  There was a lot less to lose with the VW if I got it wrong.

This got me thinking about the learning process and about the balance between risk and reward. Unless you are prepared to take the risk of breaking something, you’re probably not going to reap the reward of learning. I don’t really know exactly how the steering wheel on my ASX works because I’ve not attempted to pull it apart, and so I will probably remain fairly ignorant of its inner workings. That’s just a risk vs reward situation I’m going to accept for now. This car is simply too expensive if I fuck it up.

As a teacher, over the years I’ve done a lot of great projects with kids. Some have been amazingly successful and have dramatically changed the way I think about the teaching and learning process. And some have been total disasters. But the value for me as a teacher – as a teacher who wants to continually be getting better at what I do – comes from being willing to take that risk that even if things don’t work out, the value of what I learn from trying makes it worthwhile anyway.

For several years I worked in a fancy high-falutin private school. I won’t say that I was being completely risk averse during my time there, but I also don’t think I took as many big gambles and tried as many radical things as I once would have, simply because the stakes were a little higher if I happened to mess it up. This school had a reputation to protect, demanding parents to keep happy, and there were more policy-driven hoops to jump through to really try outrageous ideas. By contrast, I’ve worked in several schools that had far less to lose, and in those schools it was always much easier to try new ideas because it didn’t matter so much whether they worked or not. Most of the best innovation seems to come from situations where failing is most definitely an option.

It’s nice to be well resourced and have great facilities. But you can do an awful lot of great stuff in a school with very limited resources. You don’t need a lot of money or resources or fancy facilities to be innovative and try new ideas. You just need to be willing to try stuff, and to not worry about whether it works or not.

The other things that struck me as I thought about this idea is that some of the cheapest, shittiest cars I’ve ever owned – the ones I had no issue pulling apart and tinkering with – are the ones that gave me the fondest memories and the deepest emotional attachment. The last few cars I’ve owned have been brand new, reasonably expensive, “nice” cars, but I have very little emotional attachment to them at all. They are just transport. Yes they are comfortable, reliable and pleasant to drive, but that’s about it. The cars I’ve loved owning the most over the years were mostly second-hand, cheap, with lots of quirky flaws yet I look back at the experiences they gave me with such great memories and the knowledge that they even shaped me as a person.  I see some parallels with the classroom there too.