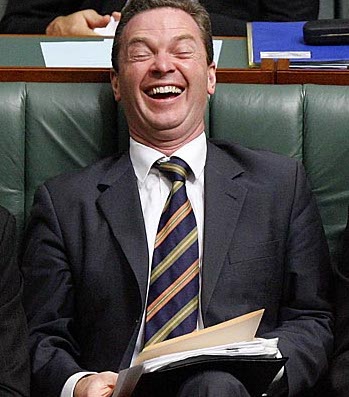 I’m not a big fan of Christopher Pyne. As far as I’m concerned, our new federal education minister has shown himself to be inept and completely out of his depth in his current portfolio. He continually implies that Australia’s teachers are less competent than they should be and that our students are not receiving a proper education.

The amount of political mudslinging every time he opens his mouth is just an embarrassment to any thinking person. In his interviews with that other redneck extremist lunatic, Alan Jones on 2GB, the two of them make complete asses of themselves as they bask in idiotic, inflammatory statements about Australian teachers.

The thing that really ticks me off about Pyne is this phrase he continually uses… “back to basics”.  In adopting this phrase he poo-poos “modern teaching methods” which he considers airy-fairy, and talks about how we need to get back to a direct instruction model where students listen to a teacher talk at them. He dismisses the idea of child-centred learning, and wants a return to a more didactic teacher-centric model.  And don’t even get me started on his ignorant judeo-Christian-centric view of history.

Christopher Pyne is a fool who knows nothing about teaching or learning.

When I hear a politician say they want to go “back to basics”, It usually means one of three things…

1. They actually have no idea how to move forward.  By going back to a previously known state, something that used to work in the past, they attempt to absolve themselves of the responsibility to move forward. If it worked for your parents, it must work for you too, right? By going “back to the basics”, whatever the hell that actually means, they don’t need to think of what a better future might look like. They don’t tackle the hard task of building a better tomorrow, they just hope that whatever we did yesterday will still work tomorrow.

2. They have no idea that the world has changed. Anyone who claims that going back to the way something worked in the past is a sustainable solution, simply does not understand how much the world has changed. By going “back to basics”, we go back to a pre-Internet, pre-hyperconnected, pre-Google, pre-Globalised world that looks very little like the world our children are actually growing up in today.

3. They have no idea what our kids actually need. Yes, literacy and numeracy are important, but it would be foolish to assume that the concept of “literacy” as it existed in the 1960s is sufficient in the 2010s. Of course we should produce students who can read and write and know their times tables (and we do, although to hear the way these politicians belittle educators you would think that not a single student can read).  There are other forms of literacy that matter as well, and I don’t want to see Australia go down the same path as our American friends who seem to have a school system which values the Three Rs and not much else, and in fact the insane focus on “the basics” has come at the detriment of so much else about learning that makes us human.

Pyne wants to quote PISA figures and all sorts of other statistics that are supposed to “prove” that Australian kids are going backwards. Continually improving our students ability to read, write and add up is important, but so is their ability to sing and dance and play and paint and draw. We need well rounded students who enjoy learning, who  discover what it means to be truly literate, not just with words and numbers but in all senses of the word.

Make no mistake, no matter how you look at it, going “back to basics” is still going backwards. Any fool can see that. Any fool except Christopher Pyne it seems.

On Ozteachers the other day, we were informed that the Draft paper for the new Australian Curriculum: Technologies has been released for review and ACARA, the government body charged with overseeing its implementation, is looking for feedback during the consultation period.

Figuring that I should probably know more about this document than I currently do, I thought it might be a good idea to set up a Google+ Hangout On Air, and invite whoever wants to talk about it together for a discussion.  It was also a motivator to get me to actually read the document first!

Thank you to those that were able to join in, in particular Bruce Fuda, Jason Zagami, Roland Gesthuizen, Nicky Ringland, and Matt Wells, as well as several others who dropped in and out during the call like Tim Wicks, Maurice Pagnucco and MaryAnne Williams. There was also some good discussion taking place in the backchannel on Google+, so visit that too if you’re keen to read a bit more.

I’m still getting my head around the relationship between Google+ Events and Hangouts on Air.  I probably should have read this article first, but I’ll know better for next time.

At the recent Google Apps for Education Summit held at MLC School in Sydney, details for the next Google Teacher Academy were announced. Rather appropriately, the next GTA will be held in Sydney on May 7/8 at the Google Offices in Pyrmont.

Full details and a link to the application form can be found at http://www.google.com.au/edu/teachers/google-teacher-academy.html

It’s a great couple of days and although it can certainly be a bit of a brain dump and information overload, you’ll have the opportunity to network with other passionate and dedicated educators, meet with some of the local Sydney Google staff, become a part of the very active Google Certified Teacher community, and join in some fun social events as well.

The event is open to people from all over the world… at the last Sydney GTA in 2011 we had participants from the US, Guam, France, Russia and other places. People come from far and wide to attend the GTA. Of course, I happen to think it would be nice to grow the local GCT community even more, so come on you Aussies and Kiwis, get your applications in by February 28.

I’m looking forward to meeting lots of you there!