At my school, PLC Sydney, we just launched a BYO iPad program for our Year 5 and 6 students. This followed on from a fairly successful trial of iPads last year and the subsequent decision that we wanted our upper primary kids to have full time access to this technology. We initially looked at the idea of the school providing and managing the iPads, but in talking to the students it turned out that a very large percentage of them already owned iPads, so it didn’t seem to make much sense to spend a whole lot of money providing something that most of them already had. The general feeling from the parents was supportive of the BYO idea and the kids were keen of course.

So this week we officially launched the BYO program. We invited all the parents and students to come to an information night where we explained exactly how we wanted things to work, and far more importantly, why we felt this was the right move to be making. The response from parents was very positive, although a few were concerned that their children would not develop  proper typing skills (which is amusing because it doesn’t seem that long ago when the big parental concern was that their children would not develop proper handwriting skills, so I guess we’re making progress!)

As well as uploading the slide deck to Slideshare, I also recorded the audio from the talk on my Nexus 4 using a Rode SmartLav Mic, then synced it up to the slides  using the Slidecast feature. This lets viewers listen to the accompanying soundtrack while the slides change in sync.

Slidecasting on Slideshare is, or rather, was, a very cool feature that I used quite a bit. Unfortunately they decided to deprecate that feature as of today, and it will stop working altogether by the end of next month, so if you’re seeing this blog post after that time I guess the audio Slidecast won’t be working. Sorry!

Do you know of any other slideware services that allow the syncing of an audio track? It’s a great feature and I’ll miss it if I can’t find a replacement.

Yesterday, I ran an all day iPad workshop for the teachers at my school. There were two things that were a bit unusual about it. One is that it was an all day event. Usually in a school – or at least in my school – it’s hard finding time for staff professional learning that allows for any real immersion and play. The second unusual thing is that it was held on a Saturday.  (And not just any Saturday, but the Saturday of the first week back after the Summer break!)

No coincidentally, the fact that it was a Saturday was the whole reason we were able to get that extended period of time for learning. When I offered it to our staff (as an entirely optional event for anyone that was interested in coming along) I thought maybe we’d get 3 or 4 teachers show up. Surprisingly, we had 25. Some even brought their children and spouses along. They didn’t get paid for attending, and there was no pressure to be there. But 25 turned up. I was impressed. 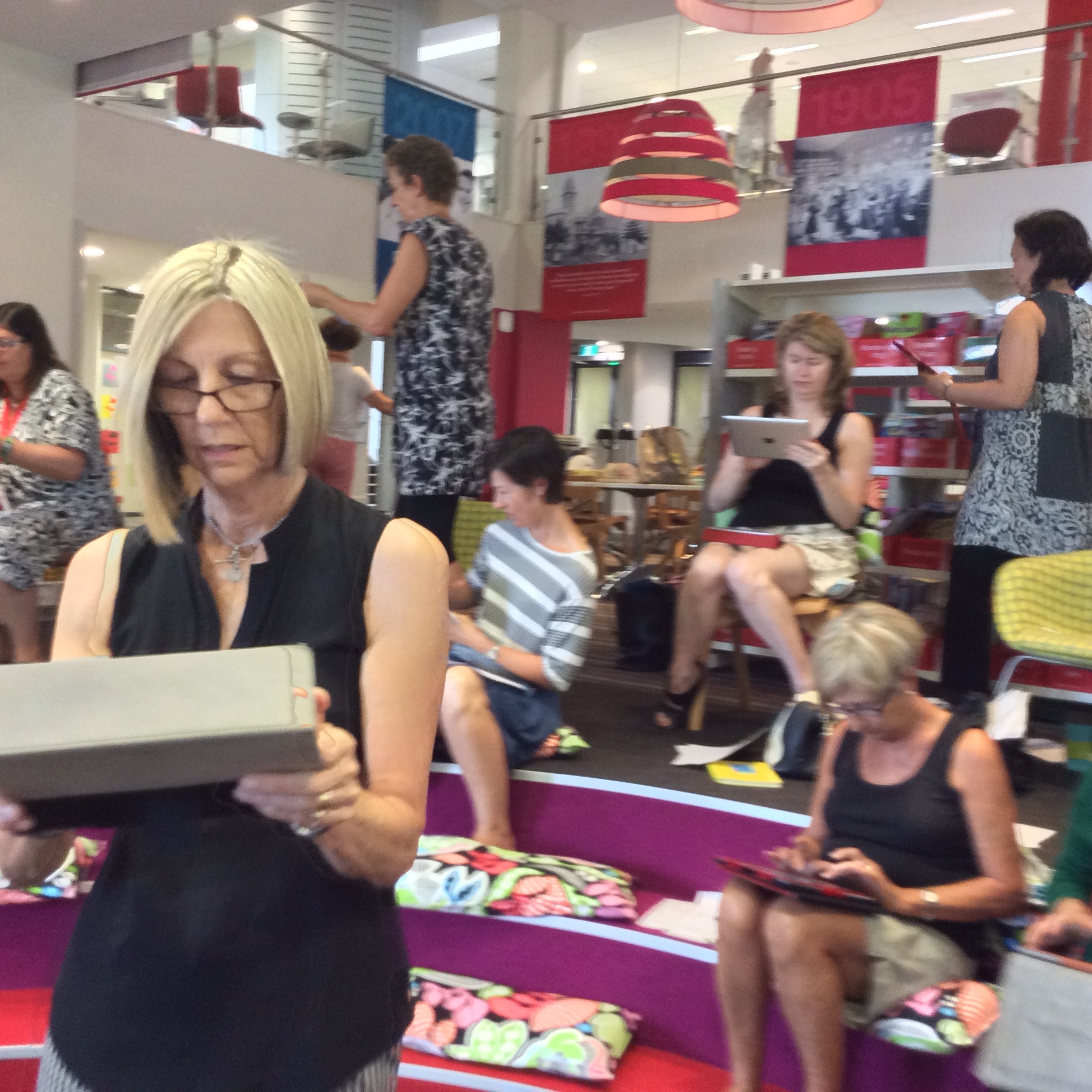 We had a fun day of learning what iPads could do, digging into the nooks and crannies of iOS, learning a bunch of tips and tricks to be more expert users, but then spending most of the day actually making things with the iPads. My goal for the day was to make it learner-centred, fun, hands-on and practical, and I think we achieved all that. I had the teachers looking for information, using maps, browsing the web, creating documents. making videos… all the sorts of things that they might typically ask students to do.

I think it’s really important that teachers attempt to produce the same kind of tasks that they ask their kids to do. Often, we teachers come from a background of using a laptop or desktop computer and although we’ve all mostly used an iPad for our personal use, it’s a very different use-case when you have to actually be productive with an iPad as your only device. Assumptions about the iPad’s ease of use as a device quickly get a reality check when you try to use them yourself for real work. You soon hit the wall with workflow issues, data transfer issues, filesharing issues… none of which are insurmountable but it is amazing how many casual iPad users have never had to deal with some of these problems that become very real when the iPad is your only device. I needed my teachers to see that while the iPad might be “revolutionary and magical”, don’t expect it to be the same as your laptop computer. It isn’t. And you need to take that into account when you ask kids to live with one as their only device.

I gave this group of teachers an hour or so to work on making a video using either iMovie or iMotionHD. I know from experience that many teachers are intimidated by the idea of moviemaking because they think it’s too difficult. And some avoid using it with their students because they feel that they need to be really good at it themselves before they can do it with the kids. The classic case of “needing to know how it all works so I don’t look silly in front of the students” syndrome.

I gave this group a very quick demonstration of the main skills they need to shoot a movie – shooting footage, editing clips, adding transitions, adding sound and narration. That sounds like a lot, but it can be easily explained in less than 10 minutes with a simple demonstration, and everyone seemed pretty comfortable with the ideas even though most of them had ever done any video editing before.  So off they went to work on their movies.

When they came back about an hour later, many were totally engrossed in the editing process. One group shot an amazing stop frame movie and added a soundtrack to it. Others made mini documentaries about the school gardens. We exported the final films, and had a little film festival on the Apple TV so everyone could share what they made.

But here’s what I found interesting.  After they had made their first ever movie, I asked them “On a scale of 1 to 10, how difficult is it to make a movie?” This group (who remember had never made videos before) thought about it for a moment and agreed it was only about a 3. In other words, they thought the iMovie software was pretty easy to use and the skills required to make a video were straightforward enough to master.

Of course, just because it’s easy to use,does not mean that they all made amazingly professional looking videos. Most were, shall we say, “a good first attempt”. So then I asked them a second question. “On a scale of 1 to 10, how difficult is it to make a good movie?” This time they agreed that it was more like a 9. Much harder.

I think this is really encouraging news for teachers, because all of those are things you can give your kids even if you don’t have strong technical skills yourself. You can say to a student “I like your opening scene but I think it’s about 10 seconds too long”. You can tell a student that “the soundtrack music you’ve chosen is not the right fit for the visuals you’re using”. You can let a student know that “your voiceover track is too soft and needs more volume”. You can give a student feedback that a “scene is too dark and needs to be fixed”.

You can give students good advice, wisdom, and adult perspective. You can help them be better by pointing out what can be improved. You can help them make great movies, even though your own technical skills in moviemaking might not be any better than theirs. And that is an incredibly important realisation. It means that we shouldn’t be intimidated about using technology in our classrooms. It means that we can feel ok about the idea that we don’t know all the answers. It means that we don’t need to know more than the students in order to give them opportunities to create.

I would love it if all teachers had my passion for what technology can bring to their classrooms. I love to see teachers pushing themselves forward to learn new technology tools and getting excited about what they might do with them. But I’m realistic enough to know that teachers have so many other demands upon them that technology is not always going to be their number one concern all the time.

I think as teachers we need to commit to at least knowing enough about technology to understand what things might be possible, even if we don’t have the high level skills required to do some of those things ourselves. And if we understand what’s possible with these technology tools, and we can get over being scared that the kids might know more than us, and instead of worrying about what we don’t know about technology and instead we fill the “difficulty differential” with our adult wisdom, advice and feedback, that’s a pretty good recipe for letting the kids unleash the potential of classroom technology for themselves.

We just need to be willing to get out of their way while providing them with some wise guidance.

PS: If you want the notes from the workshop session, you can get them here.

I posted this on Google+ last week…

Do you teach in a school that uses tablets? (iPads, Android tablets, etc) Have you been involve in planning the rollout and implementation of a tablet program in a school? Do you have thoughts about how suitable tablets are for education? Do you have any success stories to share? Warnings to give?

Come along and join in the conversation as we take this opportunity to learn from each other about this fast growing area of educational technology.

Thanks to everyone who joined us, both in the actual Hangout and also in the live stream.