About a year ago, I decided that Facebook was not contributing much to the quality of my life. In fact, I came to the conclusion that it was actually sucking more out of my life than it was adding, so I decided to simply stop using it. It had become the Anti-Social Network.

I stopped checking Facebook. I pretty much stopped posted. I removed the Facebook app from my phone. I no longer scroll endlessly through all the crap. If I really needed to access Facebook on my phone I did it using Chrome; the mobile browser experience is not as good as the app, so it’s a nice disincentive to use Facebook so often. (It also improved the battery life of my phone, because the Facebook app can be a real battery hog). When I do very occasionally choose to look at Facebook, I consciously try to spend no longer than a few minutes there. And I choose not to “like” everything because I don’t think Facebook needs to gather those signals to feed their algorithm.

I posted the following diatribe to my Facebook page on January 25 last year. I decided to repost it here, almost 12 months later, as a reminder of why I chose to limit my use of this rather invasive and consuming social network.

You may (or may not) have noticed that I barely spend any time on Facebook these days. Today is the first time I’ve logged in for quite a while, and although I have definitely missed hearing what some of you have been up to and keeping up with your goings-on, I have to say I have really not missed “the Facebook experience”.

I’ve always had a bit of a love/hate relationship with Facebook… I know there can be some great stuff happening there, but I was increasingly finding Facebook as a huge time suck that was stealing more and more hours of my life for very little real return. I, probably like you, have spent far too much of my life liking and commenting on other people’s posts, watching inane videos, or observing some of humanity’s ugliest sides in many of the discussion threads.

I was becoming more and more disenchanted with the whole Facebook experience, so I just decided to stop using it. I know I’ve gotten to that point in the past, where I’ve ranted about it, even deleted my account, etc, but I now realise it was far more about how I used Facebook than Facebook itself. (Although I still have many concerns about the way Facebook does things and the many unethical ways it deals with user data).

I still find Facebook useful as a single sign-on tool for other web services, and that is one reason I have kept my account active. The other reason is you… I am connected to many people here on Facebook, and I consider most of you friends. However, I’ve seen less of most of you over the last few years than ever before, and if that’s what it means to have friends these days, then it’s not enough for me. I’ve fallen into the trap of having friends in online spaces like Facebook at the expense of having friends in actual meetspace.

I have to say that since I have deliberately been avoiding Facebook, I’ve been happier, fitter, healthier, and have spent more time doing more things that I like doing. I’ve read more, exercised more, travelled more, and used some of that time to learn a new language. (In fact, the loading page in Duolingo actually says “15 minutes a day can help you learn a new language, what does 15 minutes on social media give you?”) It turns out that I was spending WAY more than 15 minutes a day on social media, and the truth is I was getting very little back from it.

I know some of you love this place and get great value from it, so good luck to you. Facebook is not all bad and for many of you it helps you remain connected with people you care about. I’m glad it works for you.

For me, it became a case of the more connected I became, the more disconnected I felt. I decided that there is a whole real world out there that is far more interesting and more deserving of my time than Facebook. I’m glad we are friends, and I’m glad that I can stay connected to you in some way, but it will be far less on Facebook. If you want to know what’s going on in my life, I’d much rather you call, or have lunch, or meet for a drink, or go for a walk together, or something…

I still like social media, I just don’t want it to be a permanent proxy for my real life. 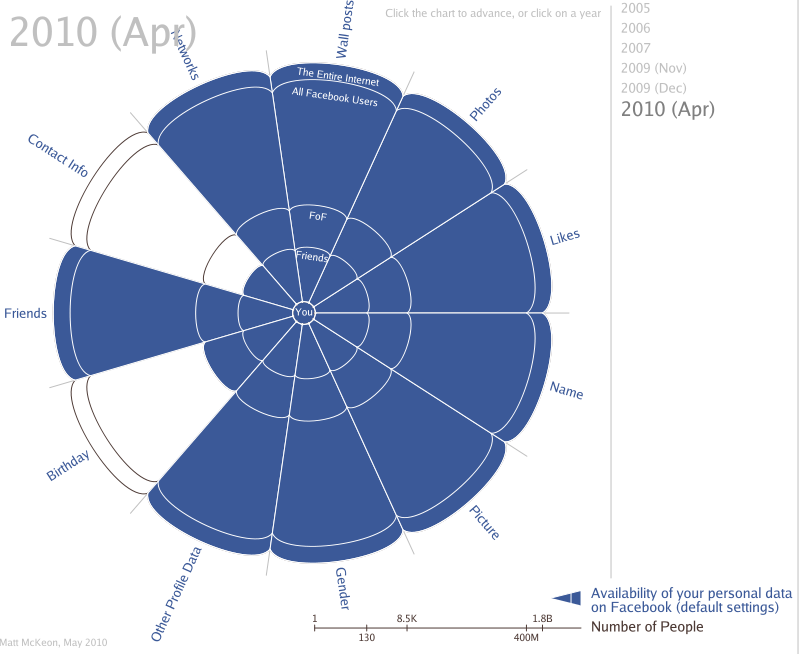 As you may have noticed, Facebook has been copping a great deal of flak in the media lately for recent changes to its privacy policy.  There is growing evidence that Facebook as a company has few scruples or ethics when it comes to the way they view and use your personal data.  The company has continually “baited and switched” the privacy settings in Facebook to the point where they have become so confusing and complex that few people truly understand them.  There are something like 50 choices leading to about 170 different privacy variations possible, all needing to made in multiple locations in Facebook, with very little consistency or “expected behaviour” between them…  consequently, there could be significant parts of your personal data that is being made public without you realising. Facebook seems to be working on the principle that most users never look at the default settings or take the time to think through their options.  The most recent changes made to their privacy policy have made the sharing of your personal information “opt-out”, rather than the previous method of “opt-in”.  This means that, unless you wade through the many privacy settings to turn them off, you are probably sharing far more than you realise. Added to this is the recent change to the Facebook Privacy Policy that essentially grants Facebook the rights to give your data to third parties and advertisers in order to target marketing to you.  The infographic to the right was created by Matt McKeon, and links to his page where you can explore an interactive version which shows how the default sharing policy on Facebook has changed over time.  It’s a bit scary!

Personally, I find this unethical behaviour completely unacceptable and, along with many others across the web, have decided to close my Facebook account.  Like many Facebook users, there have been times when I’ve found the service useful in helping me connect to friend and family, but their recent display of unethical, almost fascist, behaviour has left me with little choice but to cancel the service.  Although I had taken the time in the past to secure my Facebook account (and I was savvy enough to do so) I cannot, in principle, support a company that shows such a cavalier attitude to the privacy of their user base.

If you are a Facebook user, I would strongly encourage you to check the settings in your account to make sure they are doing what you expect.  There is a useful tool at http://www.reclaimprivacy.org/
that will actually probe your Facebook account to show you how it looks to the outside world.  I would strongly encourage you to take the time to check yours.

There is also much bigger issues about Facebook. Its disregard for open standards, its walled garden approach that continually borrows steals ideas from all over the web, its willingness to do whatever it takes to keep users within the Facebook environment… I believe in the longer term will be bad for the Internet in general. That’s a much bigger issue and beyond the scope of this particular post, but when you add it all up, I can’t in all good faith continue to support a company that continually exhibits evil motives.  Facebook might be a useful service for many, and it might offer a certain convenience factor by bringing things into one place, but there is no doubt in my mind that Facebook will bad for the open web in the longer term.

Many people in the Internet community are so outraged by the continual display of unethical behaviour of Facebook and their CEO Mark Zuckerberg that here is an official “Quit Facebook Day” organised for May 31.

If you feel strongly enough about the approach that Facebook is taking, you may also decide to close your account to send a message to the company that you are not willing to use a service that shows such scant concern for their users privacy.

Here are just a few articles (of many!) about the recent changes that you may want to read if you need more information.  It’s worth getting the full story.

I realise that many people find Facebook very useful, and many will not want to take the extreme step of deleting their account, but I do hope you take the time to make sure your account is sharing what you think it is, and to even perhaps share some of this conversation with your students.