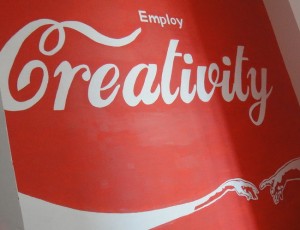 Being disciplined is hard, at least, it is for me. These projects where you promise yourself that you will do something every day for a year are not easy. You miss a day here or there and then conclude that there’s no point carrying on with it.  In truth, even if you only took 150 photos out of the 365 you’re supposed to, you’d still have 150 photos! Not to mention a whole lot more practice as a photographer.

This year I wanted to do something, but was looking for something a bit different to just taking photos. So I asked for some suggestions on Twitter and got a bunch of interesting ideas back. Taking these suggestions as a whole, I thought it might be interesting to keep it a little bit open this year and just create something, anything, every day. So in 2014 I’m doing a project I’m calling The Daily Create. Every day I’ll be posting something – a video, a poem, a piece of writing, a song, a story, and yes, maybe even a photo or two.  To keep it organised I’m doing it on a different blog dedicated just to the purpose at http://mydailycreate.blogspot.com.au/

Why do these daily projects? What’s the point?

Aside from the idea that I think that we all have a basic need to create and share our ideas with others, forcing yourself to do something every day is a wonderful way to keep learning new things. In the eight days I’ve been doing this project so far I’ve learned to use apps that I had never really learned to use, discovered techniques that I didn’t know about, solidified ideas that had only been nebulous thoughts floating around in my brain, and even solved a couple of practical problems around the house. These simple little daily creations have already given me a number of project ideas that I can get my students to work on this year.

I think when you get into the swing of doing something every day your brain starts to see new opportunities to learn and create. We talk a lot about the value of iteration, and learning by doing, and just making lots and lots of stuff regardless of whether it’s any good or not, and daily projects are a good way to do that.  You WILL learn things along the way, I promise you that. Although some people don’t always associate the idea of having discipline with the idea of creativity, they are most definitely connected!

January is easy. We all have enough things floating through our heads that we can fill January up. By mid-February you’re starting to run out of ideas but if you’re committed to the project you just force yourself to keep coming up with them and that’s where it starts to get interesting. By June you’re clutching at straws, coming up with some wacky and unexpected things because, well, you promised yourself you would and have to come up with something! By September you’ll be looking back a body of work that will surprise you in its diversity and by the end of the year you’ll actually be sad that it’s coming to an end.

It’s these little daily deliberate actions that add up over time to produce the unexpected things that often become the work we are most proud of. And if you get to next December and you’ve stuck to it, I guarantee you’ll be even more proud of yourself just for sticking with it.