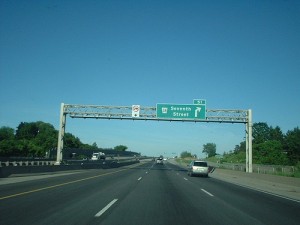 When I lived in Canada for a while, I was always a little bemused by the Canadian approach to speed limits. The maximum allowed speed limit on the QEW and the 400-series roads around Toronto is 100km/h and yet if you actually do that speed you just about get run over. The locals routinely cruise the highways there at 120-130km/h and there’s no issue.

I like to drive fast too, but it used to frustrate my sense of logic when I’d ask my Canadian friends why they didn’t observe the speed limit.

“Because then people would just do 140” came the reply.

Apart from being a really strange view of human nature, I’d then ask, “Why don’t you just post the speed limit that you actually want people to observe and then enforce that, instead of having this vague gray area where people do what they aren’t supposed to do on the understanding that nobody really minds?”

This same logic struck me today when I saw an RT from Sandy Kendell leading to a tweet from Bill Ferriter, an outstanding educator from North Carolina who shares and blogs a lot of his great work with the online community. It said…

I followed the link, and sure enough, it’s an outstanding resource rubric for helping students understand how to leave a good blog comment.  I know that many teachers will find it a really valuable and useful resource.

The PDF resource seemed to be being given away freely on Twitter, but there was a fairly obvious Copyright notice at the bottom of every page. This struck me as odd, since Copyright essentially means that you cannot use a resource without prior permission from the author.

Following the link to “download this page” took me to the webpage where I could buy the book that this free resource came from. A little confused about how a copyrighted work was being given away so freely, I responded with a question on Twitter, phrased briefly to stick within the 140 character limit, which started a conversation with Bill… 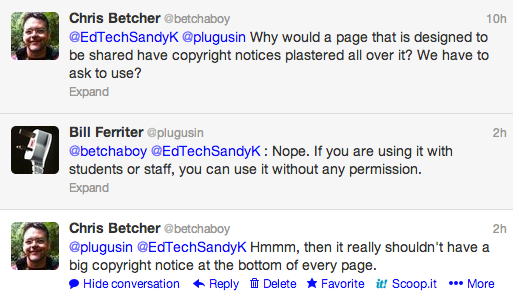 To me, this is all just grey area. If there is an intent to share something that can be used without asking permission, then adding a Copyright notice to it really muddies that intent. The conversation bounced back and forward between Bill and I over Twitter, where I was making the point that, if it’s a free resource that is being given away, then perhaps a better way to do it would be to mark it with a Creative Commons license that clearly indicated up-front how users could make use of this PDF. Marking it with a CC BY-SA-NC, for example, would mean that it could be shared freely for non-commercial purposes, with attribution, and the permission to do so was being given in advance. This eliminates the requirement to contact the author to ask permission, since permission has been pre-given.  That’s the whole point of Creative Commons.

By marking work with a Copyright notice it explicitly says that you cannot use this work without first asking permission. If people do actually follow the rules, that probably means Bill will be kept busy answering a whole lot of “Do you mind if I use your worksheet” emails.

In our twitter conversation Bill made the comment that it was his intention to make the worksheet freely available and that people were welcome to use it. The confusion arises because this same worksheet is very clearly marked with a Copyright notice.  This is just like my Canadian friends who speed along the 100km/h QEW at 130km/h – the sign says one thing, but we do the other. In this case, we say that the resource is free to use, but we signpost it with a notice saying otherwise.

I’m not intending to single Bill out here… he does great stuff, is a prolific sharer online and I have great respect for him. The problem, as he pointed out to me, is that publishers still largely don’t “get” this stuff and they don’t know that alternatives to full copyright exist, or if they do they are too afraid to use them. As an author myself, it astounds me how out of touch most publishers are with the ideals of controlled sharing. There are tons of examples of “Don’t do what I say, do what I mean”. I just think it would be far better if we just said what we mean right from the start.

Bill was trying to defend the publishing industry, reminding me that they are just figuring this stuff out like the rest of us, but I think those of us who understand this stuff should make it our moral duty to educate those who don’t, and help them understand how some of the restrictions they instinctively use, like the indiscriminate stamping of Copyright symbols on everything they publish, work directly against our goals of sharing resources freely with colleagues.

As educators, many of us make things to share with our colleagues – videos, photographs, writing, music, etc. As creators and sharers of educational content, I think we have an obligation to make our sharing intentions crystal clear.  If we intend to freely share our work, then we should clearly indicate that with the use of Creative Commons, Public Domain or some other open license that reflects our intent. If we want to protect our work and restrict access to it, then we should make use of Copyright. But I see a real problem when we confuse the message by not making that intent absolutely clear right from the start.

To paraphrase Dr Suess, you should always say what you mean, and mean what you say.  Then there is no second guessing, no intuiting of intent, and everyone knows exactly where they stand.

Rules are Rules. Sort of. by Chris Betcher is licensed under a Creative Commons Attribution-ShareAlike 4.0 International License.

6 Replies to “Rules are Rules. Sort of.”