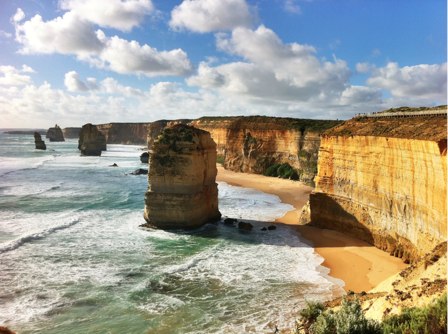 I like photography. In fact I like imagery in general, which is, I suppose, why I enjoyed art school so much. The combination of not only interesting images, but also interesting ideas, made the four years I spent at art school some of the best years of my life.

However, it was only after I taught art for a few years that I discovered that, while I liked art, I didn’t necessarily like teaching art. I’ve since spoken to many people who proclaim that the quickest way to kill your passion for something is to do it for a living. I’m not sure that’s the case… what I do now, working with kids and technology and the future, is what I love doing. But I understand what they are saying… for many people, their passions need to be unshackled from the daily “must do” so that they can be enjoyed as a “want to” instead.

So, working with imagery and design and graphics and photography remains something I enjoy simply for the sake of it. I like to take photos, or mess about with Photoshop or Illustrator, but I like to do it on my terms not someone else’s.  And yet, with such a laissez-faire attitude to these things, it’s easy to let these interests slip away in the busy-ness of life, where they simply don’t happen with any regularity.

I’ve seen people doing the 365 Day Photography Challenge over the last couple of years, and I really like the concept.  Take a photo each day for a year and publish it online. It’s a nice idea.  I’ve tried to do it myself for the past few years, starting several times, but for one reason or another I’ve just found it difficult to maintain the momentum of doing it.  All that messing about, taking photos and uploading to the computer each day and then publishing to a blog.  Sure, blogging a photo is a pretty easy thing to do, but I’ve just lacked the discipline to do it every single day.

Coincidentally, I visited my buddy John Pearce at his home near Portarlington last week. John is a far more disciplined blogger than I am and over the last few years he’s been particularly good at taking – and blogging – a photo a day.  As we walked along the beach in front of his home, he was telling me what a rewarding experience he’s found doing his 365 Day Photos. He extolled the virtues of it forcing you to look at your surroundings a little more carefully, of the discipline it creates in doing something every single day, and his enthusiasm for the idea just generally made it sound like a good, fun thing to do.

Even more coincidentally, our conversation took place on January 1. The first day of the year. I mean seriously, if you’re going to start a 365 Day program for anything, is there a better day to start it than January 1?

The thing that really clinched it though, was John’s enthuiasm for a couple of software tools that would clearly make this a far simpler, more doable, proposition.

One was Posterous.  I’ve been dabbling with Posterous for a few other projects lately, and it really is a very impressive blogging tool. It’s ability to take content from something as simple as an email, and to manage any associated digital media files like photos, videos and audio is super impressive. It’s rather remarkable ability to then automatically crosspost to other services like Twitter, Facebook, Picassa, WordPress, Blogger – you name it and it probably crossposts to it – made the whole idea just too interesting to pass up.

Then John told me about an iPhone app called PicPosterous, which specifically uses the phone’s camera (and on the iPhone 4 it’s a pretty darn good camera!) to enable images to be sent directly to a Posterous blog from the phone.  Yes, I know it can be done with a simple email, or a dozen other easy ways, but I really liked the elegance of the PicPosterous solution.  I dabbled with it over our lunch, and was really very impressed with its simplicity and ease of use.

So. A good camera on the iPhone. Easy upload with PicPosterous. Nicely packaged into a blog with Posterous. Broad distribution with the crossposting options. Oh, and of course, it was January 1.  With all of that conspiring together, how could I say no? The fact that we were going to be driving the Great Ocean Road the following day – possibly one of Australia’s most photogenic areas – might have also helped!

So, I’m in. 5 days down, 360 more to go.  You can find my daily pics at http://365daysoflight.posterous.com, where there is even a nice RSS feed to subscribe to. I also send them to Facebook, Flickr, Picasa, Identica and Buzz. (I didn’t include Twitter… I figure I already make enough noise there)  It will be interesting to look back over the photos this time next year to a) look at a neat visual record of my year, and b) to see if my photography has improved any. I’m looking forward to that. Not to mention that it’s a great way to engage with new tools, new techniques, new ideas that I may not otherwise dabble with.  This is how you learn stuff.

As my own enthusiasm for the project has grown, I’ve found myself taking a lot more notice of some really interesting photography apps for the iPhone. Having a focus of taking a photo a day has made me much more interested in finding out what I can do with the iPhone as a camera. I’ll probably write a post in the next little while to share a few of the cool photography apps I’ve discovered, but one I’ll just mention now quickly is HDR Pro. With a hat-tip to Allanah King, another 365er, who showed this to me at ULearn last year, it really is a pretty amazing app. It uses HDR – High Dynamic Range – techniques to produce some stunningly good looking images. Shooting in HDR takes multiple images of the same scene, one underexposed and one overexposed, and then merges then together to form a single photograph with near perfect exposure in every part of the photo. The example you see above is shot using HDR Pro and I think it’s pretty good for a phone camera!  Even though it was shot looking almost directly into the sun, the exposures are still pretty good with plenty of detail in the shadowed areas. That’s what HDR does really well.

So, enjoy the photos on my Posterous site, and don’t forget the check out the blogroll as it links to a whole lot of other 365ers taking some great daily shots. And if you’re a 365er yourself, let me know so I can add you to the blogroll!

A Photo a Day by Chris Betcher is licensed under a Creative Commons Attribution-ShareAlike 4.0 International License.