Sometimes I find myself dealing with people in circumstances that are completely unconnected, but which seem to have some kind of bizarre synchronicity that causes them to mirror each other.

The other day, I found myself in one of these situations…

Firstly, I was asked by a colleague to help edit some video footage from a recent school trip.  I don’t mind helping with such requests because I quite enjoy the process of video editing, so I attached the camera to my MacBook Pro, sucked the footage onto the hard drive and began dragging clips together in iMovie. My colleague looked on as I dragged clips around the timeline, clearly never having seen non-linear video editing before, and, with a little gasp of wonder in her voice, she remarked “That’s amazing the way you can do that with video!”

Later that day, I got a call from another colleague who needed help with a mail merge of some spreadsheet data into a letter she was writing.  She was aware that such mail merges were possible, but wasn’t sure exactly how to do it.  So I dropped by her office to lend a hand, and in the process of trying to sort it out I noticed that some of the data formatting in the spreadsheet was a little inconsistent. One of the columns had data with stray spaces in the text… no problem, I hit ctrl-F to call up the Search and Replace command, typed a few characters into the search field, replaced them with the characters I needed to fix the problem, clicked OK, and the changes rippled through the sheet fixing the problem in less than a second. As my colleague looked on, she remarked “That’s amazing the way you can do that with a spreadsheet!”

The last example was from yet another colleague who wanted to assemble a short end-of-year slideshow of her students to send home to their parents.  She was envisioning a PowerPoint full of pictures set to music.  Because I know how much work that can be to create, I suggested a better solution. I asked her to give me all the photos she wanted to include and I uploaded them to Animoto.com, selected a piece of royalty-free music from their online collection and pressed the Make Video button.  A few minutes later I downloaded the finished video, an impressive little piece that took me about three clicks and near-zero talent to actually produce.  Her response to the final slideshow was, you guessed it… “That’s amazing the way you can do that with digital photos!”

Can we get something straight here?  NONE of these things were “amazing”.

Having these three events happen back to back like that made me stop and think about how often I hear the “that’s amazing the way you can do XYZ!” comment.  (And just to be clear, it wasn’t that they thought it was amazing because I was the one doing it, they thought it was amazing simply because it could be done). They were amazed at what computers make possible…  editing video, fixing numbers, manipulating sound and pictures, etc… these things are still amazing to many people and I got to thinking about how often I hear the “That’s amazing!” line from people who observe technology doing things they didn’t know were possible.

I’m not for one moment suggesting that it’s good to be completely blasé about the things that technology can do.  There are plenty of totally amazing things that technology enables these days.  Separating conjoined twins at the brain with complete success is amazing. Ditching a passenger jet in the Hudson and getting all the passengers off safely is amazing.  Crashing a rocket into the moon to stir up dust and rocks to discover water there is amazing. And the fact that the law allows a Japanese man to marry an Anime cartoon character is, well, kind of freaky, but I guess still amazing.

The point is that, yes, there are plenty of amazing things that happen in our world, and its important to retain our sense of wonder and amazement at them.  No question about that.

But seriously people… editing video, fixing some numbers in a spreadsheet, or making a slideshow from some photos is NOT “amazing”. We, and by we I am particularly talking about the teaching profession in general, need to stop being so “amazed” at things that really are quite mundane. We need to stop seeing the most trivial, mundane tasks as being “amazing” simply because they were done on a computer. Being amazed that a spreadsheet can work with numbers just makes you look a bit silly.  Worse than that, being clueless about what technology can really do just sets the bar of expectation ridiculously low for students, letting them believe that they can produce any old rubbish and yet still impress their teacher, who thinks that the PowerPoint their student made is simply “amazing”.  I haven’t even seen that kid’s PowerPoint, but trust me, it’s probably not amazing.

The reason this irks me so much is that personal computers have been around for over 30 years now, and have been a significant part of most schools now for over 20 years.  Most schools and school systems have been trying to provide some level of professional development, training and support for teachers for most of these 20 years.  Even if a teacher resisted technology back in the early days of the PC, there’s absolutely no excuse for not having embedded the use of a personal computer into their daily work over the past 10 years.

It’s time to stop being so “amazed” at things that are just part of the technological and cultural landscape of life in the 21st century.  It’s not “amazing” that computers can edit video, manage numbers or manipulate digital images. It’s not “amazing” that mobile phones can stream live video or GPS your current position.  It’s not “amazing” that you can make phone calls to the other side of the planet at no cost. None of these things are really “amazing” any more… they just “are”. To be “amazed” at this sort of stuff is to fail to recognise the invisible role that technology plays in all our lives these days. To anyone working in education, working with young people, you need to realise that simple tasks performed with technology are not something to be “amazed” at, marveled at and gushed over.  For our students, the use of technology as the enabler for such tasks seems as natural as breathing air.

I was in another meeting with some students and a teacher the other day, and the teacher was trying to show the kids about a Ning they’d had set up for a class project.  The teacher was all effusive, gushed about the Ning’s “amazing” features and wanting to show the students all the “amazing” things it could do… “Look! You can use it to leave messages for each other!”, she said excitedly.  One of the students confided to me later “I can’t believe how worked up she was getting about that Ning… it’s just a blog. It’s like Facebook. Of course we know how to use it.”  It reminded me of that wonderful line from The Hitchhiker’s Guide to the Galaxy by Douglas Adams, where the people of Earth were considered a bit of a joke for being “so amazingly primitive that they still think digital watches are a pretty neat idea.”

Don’t get me wrong, technology provides as with some incredibly useful tools. The rise of Web 2.0 and the read/write web has changed the world forever. Mobile technologies just keep getting more and more impressive.  But let’s keep things in perspective.

Save the “amazement” for things that truly ARE amazing, and realise that technology is not some kind of unexplainable black magic voodoo… it just “is”. 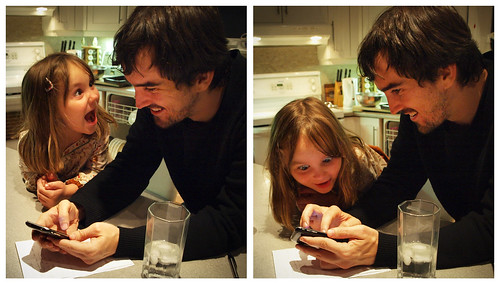 This is Not Amazing by Chris Betcher is licensed under a Creative Commons Attribution-ShareAlike 4.0 International License.

24 Replies to “This is Not Amazing”